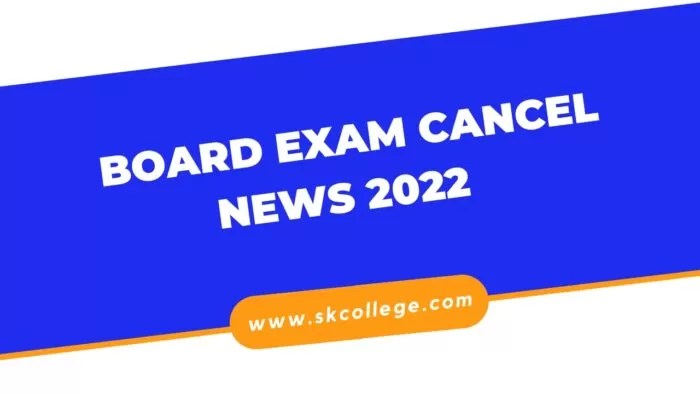 There have been a lot concerns and stories behind the Board Exam cancellation.

Even though the government had cancelled the board exam in their first sitting, several changes has been made.

This article will be related to Board Exam Cancel News.

We will be talking about a few topics in this article as mentioned below and will also be giving a few details regarding those topics.

The topics we will be discussing are:

You can click on the sub topics mentioned above to directly go to that part in this article.

As mentioned above, the case/petition was heard by in 3 days by different authorities and he decision made by them will be explained down below.

The matter to conduct physical exam during Covid was one of the main concerns of the students as well as their parents.

The bench consisting of Chief Justice NV Ramana, Justices AS Bopanna, and Hima Kohli  took notice of a lawyer’s remarks for an early listing of the case.

Anubha Shrivastava Sahai, an Activist filed a petition seeking the directives to the school board exams of 10th and 12th conducted by the CBSE and other school boards.

The reasons being for the Board Exam Cancel News is mainly concerning the students go to these physical exams during the times of Covid-19.

The other few parent and students had a concern to writing the offline exam where most of their classes were held online.

The preparation for an offline exam were not given and that many students are not ready for such a task was also added concern from another few.

The Supreme Court on 23rd February put down the petition regarding the Board Exam Cancel News stating “it was a pre-mature plea from the authorities because they could not come up with a decision”.

After the plea was dropped the CBSE, ICSE and the State have come up with the examination dates for their schools.

We will be explaining about them in the paragraphs down below.

Even though several parents and students tried reaching out on social media with the hashtag # InternalAssessmentForAll2022, they supreme court dropped the plea.

And the court also stated that such petitions were a waste of time and confusing for the student preparing to write the exam. It can be very misleading as well.

Even though the petition was filed by student from 15 different states on the Board Exam Cancel News, the decision was not in their favor.

In the previous year the students were evaluated through their internal marks like assignments and small test, the board took a decision to have physical examinations this year.

The exam dates are out and different for every state. We would recommend the student to check their respective state official site to get the dates for the exams.

CBSE and ICSE Board Exam Cancel

The examination date after the Board Exam Cancel News case was released by the CBSE and ICSE boards.

On the 26th of April, the CBSE would be conducting the board exams for both 10th and 12th classes.

The same goes for the ICSE as they would also be conducting the exams for the classes 10th and 12th.

In addition the CISCE that is the Council for the Indian Scholl Certificate Examination stated that the Final Time Table for these examinations would be revealed soon.

The CISCE has also released the term one or semester one semester.

After the final exam, both the board will evaluate the marks from the 2 exams and finalize if the student has passed or failed.

The final results from the boards will be in the status of either “Pass” or “Fail”.

The CISCE has requested to not have any Pre-Board examination for the semester 2 until the class 10 and class 12 curriculums have been finished and amended.

The results of the 1st semester exams of the CBSE are still pending and it is said to be launched very soon in the official website.

Will the board exams be there?

After the Supreme Court hearing, we can be sure that the board exams have not been cancelled and it is most likely to happen in the dates provided by the CISCE.

The Supreme Court dropped the petition as mentioned earlier in the article stating that this was an unnecessary plea and would only cause confusion for the students.

The case was dropped and the time tables are soon to be out.

So we can assure the students that examinations are going to take place and have not been cancelled or postponed as of now.

The boards have requested the students to be completely vaccinated as soon as possible before the date of the examination as it would create a safer environment for everyone attending the examination.

As we have discussed the topics on the Board Exam Cancel News in this article, we hope we gave the students a clear image on the topic.

We advice the students to prepare for the exams and not to wait for the cancellation or postponed new of the exams as it is very unlikely to happen.

We would also suggest that the students regularly check the official website for the time table dates and other news regarding the board exams.

We wish the very best for the students who are preparing for the exams.