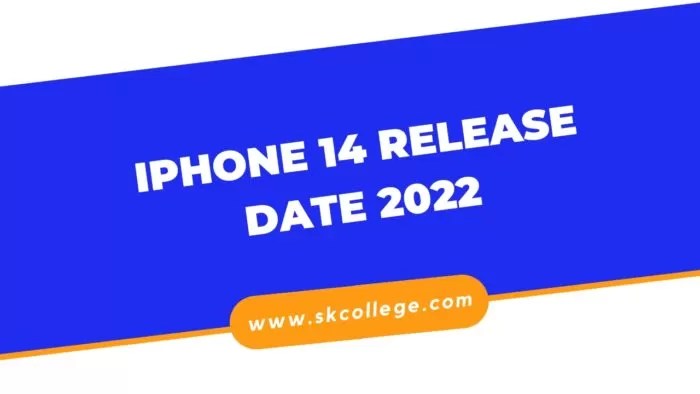 iPhone 14 Release Date: Today we have an exciting topic for our beloved readers and for all the Apple fans out there.

You heard it right, today we are going to talk about the new iPhone 14 Release Date in different countries, its features, leaks and rumors heard about the upcoming iPhone.

As the iPhone 13 made a huge impact on the smartphone industry last year with its various models and outstanding performance and amazing camera quality.

Apple is set out to top the last years model with the new iPhone 14 this year.

Just like the earlier versions of the iPhone, this years iPhone will also change in the specifications as model changes from iPhone 14 to iPhone 14 Pro or iPhone 14 Pro Max.

In this article like we said earlier, we would be covering the entire details about the new iPhone 14 Release Date and specifications.

The details of the content of this article will be given in the box down below.

Note: clicking on the topics in the below box will directly take you to the content regarding it.

We have been hearing the rumors of the new iPhone 14 just a few months after the release of the iPhone 13.

Even before the release of the iPhone 13, we heard a few plans or changes that Apple wanted to make to their flagship phone.

But none of those changes were there when the iPhone came out. So, we expect that Apple has plans to bring those major changes to the new iPhone 14.

Rumors of the new iPhone 14

This year Apple is planning to change the sizes of their flagship phones and also planning to eliminate the iPhone mini series as they had a huge fall in sales in the previous year.

The line up announcement for the new iPhone 14 Release Date is the same as the previous year, with the 4 models as follows:

till the last year the iPhone models had a notch in the front for the camera and the face ID scan and for all other necessary equipment.

But this year, the new model of the iPhone 14 is set to change all that. The new design will not have a notch in the front of the screen.

This is still a rumor and these new design changes are only to be expected on the models from Pro and above.

The standard model however will have the same design as the last year’s model.

The current rumor is said to be that, Apple will have a set of combination design with a hole punched camera and a pill shaped cutout for the Face ID components.

Now let’s talk about the rear side of the new iPhone 14.

This could mean that the lenses, flash and LiDAR scanner could all be located in the rear glass of the phone.

But the most recent reports says that the flushed out rear camera design would only come in the iPhone 15 and most likely not on the iPhone 14.

But for the iPhone lovers out there, this is the only bad news about the new iPhone 14 as the other features are amazing and have upgraded to a whole new league.

The body, camera, sensors and other features have been upgraded into the latest technology and advancement compared to any phone out in the market.

The new iPhone 14 body is said to be made up of high-quality titanium alloy frame.

The new design is also said to have a new vapor chamber thermal system that will help the phone to maintain temperature to reduce the impact on the new faster chipsets and 5G connectivity.

The no Notch and new Face ID hardware design is only said to be available on the Pro versions of the iPhone.

The standards versions will not receive these new changes.

But the Apple analyst Mr. Ming-Chi Kuo said that Apple is trying their best to eliminate the notch in the front in all the new 2022 series of the new iPhone and adopt the hole-punch style design that has been very popular on many android phones.

The upcoming iPhones are rumored to have a ProMotion display that offers a refresh rate of 120Hz.

The ProMotion display is another rumor that has a lot of conflicts in the internet.

Many sources explains that the availability of the displays to produce 120Hz refresh rate are relatively low and this feature could just be a rumor while other analysts like Jeff Pu still claims that this will be the new and unique feature to all the new upcoming iPhone 14 models.

As mentioned above, the iPhone 14 will have no rear changes and it will remain the same as the iPhone 13 design.

The phone will have the same camera bump as its previous model. The sizes of the new iPhone 14 would be as follows:

Apple has decided to take off the mini version of the iPhone series as they were less popular among the buyers in the market. Meaning we can all say goodbye to the 5.4-inch iPhone displays.

As mentioned above, the iPhone 14 is said to have a titanium alloy chassis design.

The titanium alloy design is used in the Apple watch and this will be the first time it is going to be used in the designing of the iPhone.

Titanium is more scratch resistant and stronger than both steel and aluminum.

The rumors about the Lighting port are still yet to be confirmed as Apple had plans to remove the port and introduce portless charging design and charging done using MagSafe, but it is still unclear.

Camera, Storage and other hardware details

The new iPhone 14 is packed with the new changes in the camera.

The 48-megapixel camera would be able to shoot 8k videos and in low lighting setting the camera will be able to take photos in 12-megapixel and merge them (pixel binning) into one super-pixel photo for improved low-light sensitivity.

Apple believes that these new camera and image recording quality will help with the new AR/VR equipment that Apple has in development.

The RAM in the new models is also said to be the same as the old version which is 6GB of RAM.

The iPhone 14 is set to have the Qualcomm Snapdragon X65 modem, which is the worlds first 10 gigabit 5G modem and antenna system for smartphones.

The storage is said to be the same as the iPhone 13 which is 1TB, but there are rumors stating that the Pro versions of the iPhone 14 might have an option to expand the storage to 2 TB. This rumor is still yet to be confirmed.

The new iPhone 14 might not have a sim slot as Apple is encouraging the idea of E-Sim.

Apple has advised U.S carriers to prepare for the launch of E-Sim only smartphones in 2022.

As E-Sim function is not available in every country, Apple will also launch versions of the new iPhone 14 with a nano slim slot option.

now let us talk about the new iPhone 14 Release Date 2022 around the globe.

The release of the new iPhone might differ from region to region and the first country to have the iPhone 14 will most definitely be the U.S.

Down below we will mention few countries with their release date details.

The above-mentioned dates are from the sources and rumors available as of now.

The dates may vary from region to region or due to other problems such as lack of availability.

These dates are not a true fact rather an information provided in the context of reports.

As we are all excited about the iPhone 14 Release Date and the new phone, we hope this article gave you the information you were looking for.

As most of the information are from verified sources and only a few of them are still uncleared rumors, we advise our readers to wait for the final confirmation from Apple itself.

Stay tuned for more updates and have a nice day.