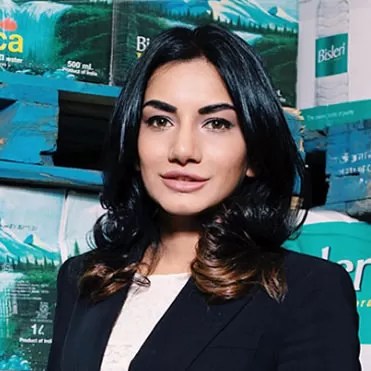 Jayanti Chauhan is an Indian businesswoman. She is the vice chairperson of Bisleri International Private Limited.

Bisleri is an Indian company that produces and sells bottled water. The company was founded in 1965 by Felice Bisleri, an Italian businessman, and is headquartered in Mumbai, India.

Bisleri’s products are available in a variety of sizes and are sold throughout India and in several other countries.

In addition to bottled water, the company also produces and sells a range of flavored water and carbonated beverages.

Bisleri is known for its focus on quality and sustainability, and has implemented several initiatives to reduce its environmental impact and improve the welfare of the communities in which it operates.

In 2013, Jayanti Chauhan was listed among India Today’s 25 most influential women in India. She was also featured on the cover of India Today magazine.

She shares a special bond with her father. She taught her how to ride a bicycle and how to swim. In an interview, she revealed that her father does not go out of India much because he is vegetarian.

One time he visited her when she was studying in London, he taught her how to cook dal. Tennis, Hollywood classics made in the 1950 and 1960s, especially, films starring Audrey Hepburn, and South Indian & fried food are some of their common interests.

In an interview, when she was asked about what kind of relationship she had with her father while growing up, she said,

She is a travel enthusiast. In 2010, she took a break from work and went on a world tour; she travelled to many countries during her tour including Costa Rica, the United Kingdom, Switzerland, and France.

In 2011, Jayanti Chauhan rejoined the Bisleri and began working at the Mumbai office. She works on the development of new products and is involved in managing the operations for Bisleri Mineral Water, Vedica Natural Mineral Water from the Himalayas (the Luxury Segment), Fizzy Fruit Drinks and Bisleri Hand Purifier. Since, she is interested in digital marketing, she manages marketing, branding, advertising, and communication development at Bisleri.

She has an interest in photography. Whenever she goes on a trip, she takes her camera along with her to click pictures of people and surroundings.

In 2016, she did a photo shoot of models for the House of Kotwara, an international fashion house.

In 2017, she photographed models for the spring collection by Renge India, a clothing brand.

In November 2022, Jayanti hit the headlines when she refused to run her father’s Rs. 7,000 crore firm, Bisleri International. In an interview, her father, Ramesh Chauhan, revealed that he was looking for a buyer for his packaged water company as his daughter, Jayanti, was not interested in handling the business. In 2022, Ramesh J. Chauhan made his decision to sell the company to Tata Consumer Products. In an interview, he revealed why he chose to sell the company to Tata Group and said,