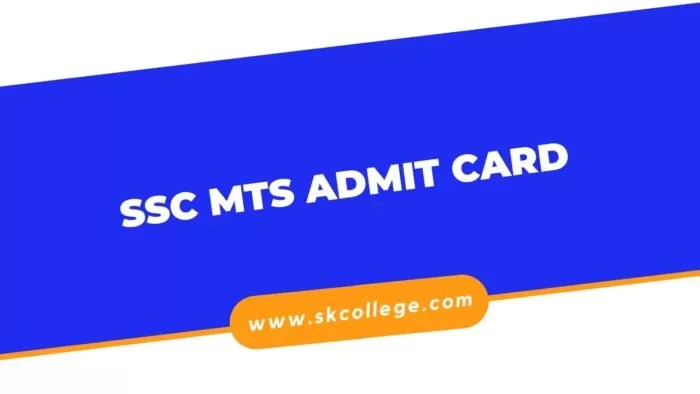 SSC MTS Admit Card: SSC MTS Exam is organised by Staff Selection Commission and is conducted at a national level.

There is a total vacancy of 7301 vacancies for the posts of Havildar and Multi-tasking staff.

In this article we will be discussing about the following topics:

This year, there is a total vacancy of 7301 posts.

The SSC MTS exam date has been declared by the Staff Selection Commission which will be held from 5th to 22nd July, 2022.

The admit card for the exam has not been released yet and will be released before one or two week before the exam.

The admit card will be issued to all the candidates who have submitted the application form.

How to PDF download the SSC MTS Admit Card 2022

The SSC MTS Admit card will be released online and the candidates will be able to download their admit card by following the below mentioned steps:

The date of issue of SSC MTS Admit card has not been released yet.

However the admit card will be issue online, one or two week before the exam so that you can check all the details of the admit card and report if there is any error.

The SSC MTS Admit card will have the following details:

i) The name of Staff Selection Commission along with its symbol so as to verify the genuineness of the admit card.

iv) The candidate’s date of birth

vii) Time of the exam

ix) Other important information which a candidate should follow

The exam is conducted in 3 different stages:

The candidates must pass all the respective stages in order to qualify for the merit list.

To apply for the examination, the candidate needs to fulfil the eligibility criteria:

Applicants from all over India will be eagerly waiting for their SSC MTS Admit card which will be announced soon.

The applicants must start their preparation as the exam dates are released.

We hope this article would hep you to download your admit card for exam.

Moreover we will update the date as soon as the announcement is made by the officials of Staff Selection Commission.