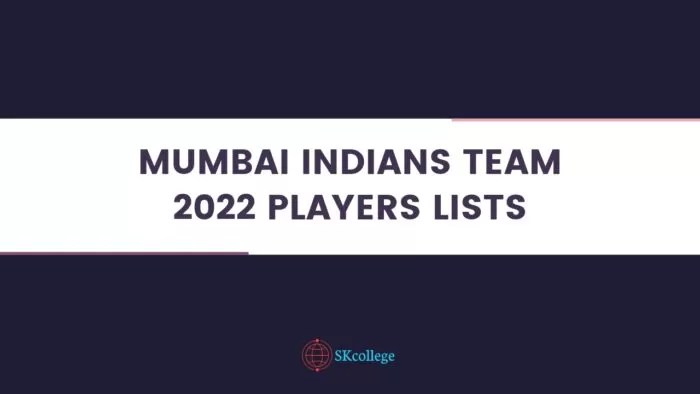 As we all know Mumbai Indians Team 2023 needs no introduction. This team has won 5 IPL Tournaments and is one of the biggest teams in IPL.

The Mumbai Indians Team was founded back in the year 2008. It is an IPL Franchise team in cricket and based in Mumbai, Maharashtra.

The Indian Premier League is all set to get started with its 16th edition in 2023. The Board of Control for Cricket in India BCCI recently required the teams to announce the retentions and releases ahead of the mini-auction 2023.

All the team management including Mumbai Indians named their retentions and announced the releases on 15 November 2022. All the released players will be auctioned on 23 December 2022 in Kochi.

The Mumbai Indians owned by the business tycoon, Mukesh Ambani of Reliance Industries had their worst season last year.

Their camp was hit by a lot of injuries, unavailability of a few high-cost valuable players and most importantly, lack of a proper team combination.

More than the performance of each individual player on the ground, what actually wrecked the season for Mumbai was the instability of the team.

The present owners of team is Mukesh Ambani. Mumbai Indians will be the only team who will play all their matches in front of the home crowd as all the matches in the IPL 2023 Season will be played in Maharashta.

They had a their doubts on replacing Hardik Pandya. The team won their 5 tournaments under the captaincy of Rohit Sharma.

Rohit Sharma was the most obvious pick as he had made a huge impact on the team with 4,441 runs to his score record.

He is an astonishing player and the first image that comes to the hearts of every cricket fans out there who hears the name Mumbai Indians.

Mumbai Indians Team 2023 was bought by the reliance group for $111.9 Million which makes them the most expensive club in the league to sell. Reliance bought the club on a ten-year term.

Mumbai Indians Retentions and Releases for 2023

If one was to view it on paper, Mumbai’s camp was sort of completely full of bog names of the cricketing industry but they were the ones whose performance has always been a theme of the question.

Primarily, these payers were Jayadev Unadkat and Basil Thampi. Their failure to perform well in the league cost Mumbai hard.

Thus, the management has let them go for the upcoming season. Additionally, Mayak Markande who they have trusted for a very long time will no longer be part of the camp as they have released him.

Players like Murugan Ashwin and Daniel Sams who have not made many major changes by being a part of MI also had to bid farewell.

The retentions have been made for the players around whom the management can form a team with the befitting combination.

MI has also shown incredible belief in players like Ishan Kishan and Rohit Sharma despite their inability to perform in the last season.

Dewald Brevis and Tim David are some good additions to the team of Mumbai which they did not let go.

Mumbai has decided upon the following squad for the upcoming edition of IPL post-retentions and releases. the squad will surely have substantial additions in the Mini Auction that will be held in Kochi on 23 December 2022.

They not only ended the season in the league stages but also finished in the last spot. Moreover, they faced 8 consecutive losses.

Rohit’s form is presently questionable and he has been very inconsistent with the bat in both, the Indian Premier League and International Cricket.

His captaincy in the latest T20 World Cup has raised serious questions regarding his capabilities with the team.

His performance in the upcoming edition for Mumbai, both as a Captain and player will probably be closely viewed under a lens for he might not have many chances in the bag since age is also an approaching factor as far as his cricketing career is concerned.

The Retained Players of the team are:

The list is as follows and the Mumbai Indians Team 2023 price of each player will be mentioned as well.

The most expensive player in this Mumbai Indians Team 2023 Squad is Rohit Sharma with Rs. 16 Crore, then in second place comes Ishan Kishan bought in auction with Rs. 15.25 Crore, and in third place we have Jasprit Bumrah who is also one of the retained players with Rs. 12 Crore.

The Mumbai Indians team 2023 auction list includes player who can single handedly turn the game into the team’s favour.

They have been very accurate with their buys and also had successfully retained four of their major players in the IPL.

They would look to win their sixth IPL tournament and thereby continue their golden run.

The Mumbai Indians Team 2023 playing eleven’s advantage is their top 3 who has scored loads of runs in the past also.

The team is full of match winners and therefore will be a threat to other teams in this year’s mega tournament.