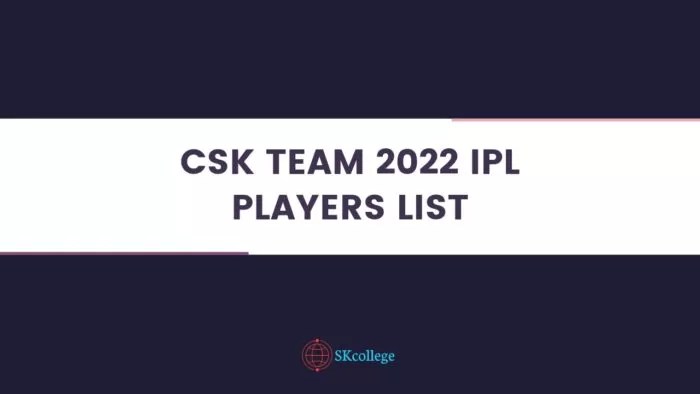 CSK Team 2023: The Chennai Super Kings Team was founded back in the year 2008. It is an IPL Franchise team in cricket and based in Chennai, Tamil Nadu.

The last season for Chennai was a disappointing one. They finished in the second last position in the points table and lost most of the games while being constantly struck with the absence of key players and rift rumours between the players.

This season, in 2023, they will surely look forward to getting back to their usual uniformity and ruling the league stages.

On 15 November 2022, they announced their retentions and releases ahead of Mini Auction that will be held on 23 December 2022 in Kochi.

Chennai released a handful of players while retaining its ultimate core of Dhoni and Jadeja.

Despite the rumours of a rift between Jadeja and Dhoni-led CSK, the former has been retained and everything seems well with the Chennai family.

The retention of the players who have been sticking with Chennai for a few seasons now, such as Deepak Chahar, Moeen Ali, Ruturaj Gaikwad, Mitchell Santner, and Ambati Raydu, is not a shocker.

Finds like Mukesh Chowdhary from the last season are only making the CSK Team 2023 stronger.

He has not only been one of the most legendary Indian Captains but has captained the team since the very beginning.

Along with that, he is the most dependable finisher in the history of IPL whose performance has literally roared on the ground and snatched away games from the opposition.

Dhoni’s strike rate takes an incredible jump in the last over and his ability to hit sixes on the very last ball of the match does not seem to tremble even for a season.

His form, fitness, and abilities are still very crucial for Chennai. He is 41 and going strong but since 2018, speculations regarding his retirement rise every year.

However, for the present year, Chennai Super Kings’ CEO Kasinath Viswanath has confirmed that he is all set to continue leading the side.

The present owners of The CSK Team 2023 are Chennai Super Kings  Cricket Limited who acquired the rights from India Cements  from the year 2014.

The Home Stadium of the team is M. A. Chidambaram Stadium in Chennai itself. But unfortunately this year no team will play in their home ground.

They will be targeting to defend their title and to win their 5th IPL Trophy which will make them a joint record holder of winning the most IPL Tournaments along with Mumbai Indians.

CSK Team 2023 has updated their squad and team with dynamic players in both batting and bowling departments players in the high hopes of taking home the victory this time.

Chennai Super Kings is one of the most successful franchises in the history of IPL and they have retained most of their core members.

One of the main reason behind their enormous success is M S Dhoni who with his exceptional leadership quality and smart captaincy has helped CSK to win matches from difficult situations.

The CSK team 2023 captain would be hoping continue from where they left in the previous season.

The big Auction was held on February 12th, 2022 and CSK has succeeded to robe in few big names in the world cricket.

This year CSK Team 2023 were able to make a major deal at the auction and has able to retain some of their core players who have helped CSK win the IPL title 2021.

The best deal in the auction they got was Devon Conway for only Rs.1 Crore which is considered as a stel looking at the destructing form Devon Conway is.

Then they had snatched Dwayne Bravo for Rs.4.40 Crore and they made their most expensive buy with Deepak Chahar for an eye-catching Rs.14 Crore.

Chennai Super Kings consists of mixture both experience and youth. Here is the CSK team 2023 players list with price :

CSK has been a consistent performer in the IPL and the 2nd team to win four IPL Trophies.

Since the inaugural season, CSK has performed well under the leadership of the captain cool, M S Dhoni.

The team will always be one of the serious contenders of this season IPL Tournament as they have a perfect balance of youth and experience.

Also with several good players in the csk team 2023 new players list, CSK would be hoping to continue their solid performance in the IPL.