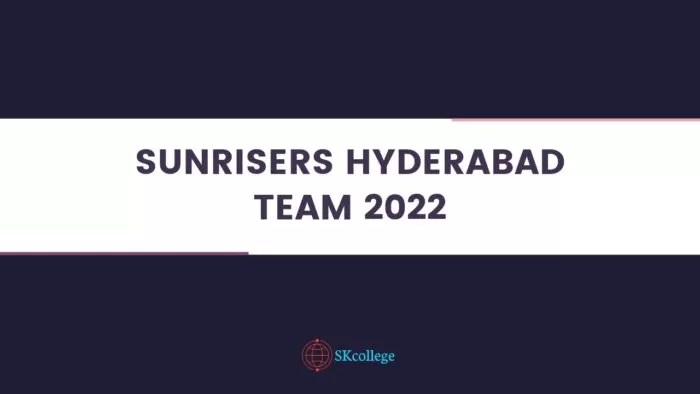 Sunrisers Hyderabad is a team that needs no introduction to any cricket fans out there. They won the IPL Trophy back in 2016 but lately has been struggling to find their way back in.

In the 2021 IPL Tournament, SRH was one of the team to finish at the bottom of the points table.

The Sunrisers Hyderabad Team has also retained and released players from last year’s squad for IPL 2023.

Furthermore, the article will also include the history of the team and its performance in previous years.

Sunrisers Hyderabad Team 2023 has a new hope with a new team and new captain, this year they are looking forward in taking the IPL Trophy home.

SRH is owned by Sun Tv and was formed in 2012. Most of the games they played as underdogs and finally winning their first ever trophy back in 2016.

At that time, it was David Warner who led the team to victory.

With amount of Rs.68 Crore, the Sunrisers Hyderabad Team 2023 was looking forward to the auction as it is crucial that they need the best team this year to take home the IPL Trophy.

The IPL Mega option was very crucial for this franchise. The Sunrisers Hyderabad Team 2023 retained only 3 of their players.

One of the mistakes we think made by the SRH was not retaining David Warner whose 2021 IPL performance was incredible. We believe the IPL retention rule had something to with it.

As the mini-auction for the Indian Premier League for the year 2023 is conducted successfully on 23rd December. SRH bought a total of 13 players in this auction and here is the list of full squad: –

It has been quite shocking for the SRH fans ahead of the auction. At present, SRH are lacking options for providing the responsibility of leading the team in the upcoming season of IPL.

Nevertheless, the franchise can consider Bhuvneshwar Kumar as a first option as he has decent experience in leading the team for some matches.

Additionally, Aiden Markram can be another choice for the captaincy as he has the experience of leading the South African national team. However, the franchise’s search for a captain has not ended yet for the IPL season 2023.

The Retained Players List of the Sunrisers Hyderabad has been released by the SRH owners. The authorities provided the option of retaining players for the IPL Auction to be held in the month of December 2022.

The deadline provided by the authorities for retaining the players and providing the list to the IPL authorities was the 15th of November, 2022.

Here we are providing the list of the Retained players and the role for which they have been retained by the franchisee.

The SRH franchise has retained a total of 12 players for the IPL auction to be held in December 2022. It also includes four overseas players.

However, the last time skipper of SRH, Kane Williamson has not been retained by the franchise this year.

The new auctioned players will be mentioned below in the Sunrisers Hyderabad Team 2023 Players List.

Sunrisers Hyderabad Team 2023 had spend all their money in the auction leaving just Rs.10 lakhs in the wallet.

The biggest purchase made by the team during the auction was Nicholas Pooran for Rs.10.75 Crore.

They also bought Washington Sundar and Rahul Tripathi spending a lot of money for this duo, they respective amount was Rs.8.75 crore and Rs.8.5 Crore.

Sunrisers Hyderabad Team 2023 bought around 20 players and retained 3 of their brilliant existing characters.

Now let us explain in detail about a few of the key players in Sunrisers Hyderabad Team 2023 New Players List.

Kane Williamson – was retained by SRH for Rs.14 Crore. He is from New Zealand and plays in the batting position.

Kane has been playing in the team since 2015. And he is the current Sunrisers Hyderabad Team 2023 Captain and the New Zealand team.

Hopefully he has recovered completely from his elbow injury.

Even thought his world cup records haven’t been great, Kane’s performance record has never gone down but just kept rising.

Williamson has become a wonderful leader in the past few years.

One of the main reasons white Williamson is a crucial part in the team is because of his ability to perform under intense pressure.

Abdul Samad – is yet again another player retained by SRH for Rs.4 Crore.

He has not done much to place his mark on the team but his batting performance last season against some great bowlers earned the trust of SRH and decided he was an asset to the team.

We believe that he would be having his moments in this season and he would have the chance to shine and show his true potential.

Abdul Samad is from Jammu Kashmir, India and will be an upcoming talent in the Indian Cricket Team.

Umran Malik – is also a player who was retained by the team for Rs.4 Crore. Umran Malik is also from Jammu Kashmir, India.

SRH then made Umran as the short-term covid substitute for T. Natarajan in September 2021.

Against Kolkata Knight Riders in Oct 3rd 2021 is where he made his IPL debut.

During another match against Royal Challengers Bangalore is the match he made headlines, he made bowled 5 balls in a row at the speed of 150 kmph and more.

Last year he was nominated as the net bowler for the Indian Cricket team for the ICC Men’s T20 World Cup because of his fast bowling.

The same year is when he made is debut for India A against South Africa A.

Nicholas Pooran – Is a player who was bought in the auction for Rs.10.75 Crore from Kings 11 Punjab.

Nickolas is a West Indies player and has made a few good stats after his enter. He is known for his aggressive bating style and took his first half century against India on T20I.

Later on in the year 2017 he was bought by Mumbai Indians for the IPL.

Nicholas has already set up his mark making him known as the Aggressive batsman from West Indian.

He has the potential to rise up and shine in this year’s season and we hope to see his amazing performance.

Now we will be showing you the details of how much each player was bought for from the auction and we will also be mentioning the players who were retained.

The Sunrisers Hyderabad Team 2023 Players List with Price is as seen below:

The retained players price lists are as follows:

We think that this year Sunrisers Hyderabad has the potential and player to go for this seasons IPL trophy.

With players like Kane Williamson to guide the team and  a few strong players like Umran Malik, Abdul Samad and Nicholas Pooran the team definitely has a chance to win.